Home » Books » Mind in the Balance: meditation in science, Buddhism and Christianity

Mind in the Balance: meditation in science, Buddhism and Christianity 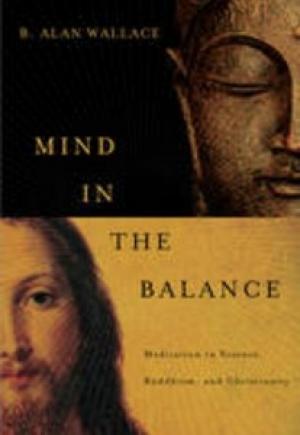 Our best-selling mind and consciousness scholar brings the world into focus through the methods of empirical study and meditative religion.

By bringing the meditative practices of Buddhism and Christianity into a dialogue with the theories of modern philosophy and science, B Alan Wallace reveals their unified approach to discerning the objective world.

Wallace begins by linking Christian and Buddhist meditative practices. He outlines a sequence of meditations for the reader to undertake, showing that, though Buddhism and Christianity differ in their belief systems, their methods of cognitive inquiry provide similar insight into the nature and origins of consciousness. From this convergence Wallace approaches contemporary cognitive science, quantum mechanics, and the philosophy of mind. He connects Buddhist and Christian views to the provocative theories of Hilary Putnam, Charles Taylor, and Bas van Fraassen, and he seamlessly integrates the work of Anton Zeilinger, John Wheeler, and Stephen Hawking. Combining a concrete analysis of consciousness with a guide to cultivating mindfulness and profound contemplative practice, Wallace makes new strides in the mapping of the mind.

“Always challenging and controversial, B. Alan Wallace’s abilities as a scholar and writer give this book an accessibility and breadth rarely encountered. Wallace’s largely successful bridging of history, theory, Christianity, Buddhism, and science make his book truly unique.”
—Adam Frank, University of Rochester

“Mind in the Balance addresses in a lucid, extremely well informed, and often quite original way what is now widely seen as the greatest lacuna in modern understanding: the actual nature of mind or consciousness. Its consistent advocacy of logical rigor, its basis in a truly magisterial knowledge of Buddhist, Christian, and other contemplative practices, its deep familiarity with contemporary scientific thinking, and its imaginative and creative merging of all these strands make it a significant contribution to the field.”
—Robert Mayer, University of Oxford